Live Data Visualization at its Best

This live visualization enables you to see the daily flights of FedEx planes throughout the US. Very cool and, I believe, increasingly the way data will be presented the future now that broadband is so widely available in the first world.

Holy Toledo! The Mozilla guys are on fire! First, they released a good upgrade to the Firefox browser (despite being unable to recognize it as an upgrade from within the browser itself). Then, in the course of two days, Mozilla becomes the recipient of two major product codebases: Qualcomm's beloved Eudora mail agent and Adobe's ECMAscript execution engine. This latter project, called Tamarin, consists of the virtual machine that runs Flash Player 9.

Cool stuff! Mozilla used to be the boneyard for failed Netscape projects, but now it is suddenly at the heart of the open-source world--a pinnacle until recently occupied by the Apache Software Foundation.

As for my beloved Eudora, I need to see what happens with the project. I have been a paying customer for years. If Mozilla keeps it going, I'll stick with it. If not, I'll probably switch to Thunderbird. 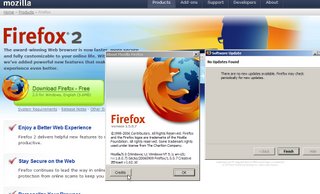 So, isn't Firefox 2.0 an upgrade to 1.x releases? Apparently not, according to this notice when I tried to get Firefox to download the new version.