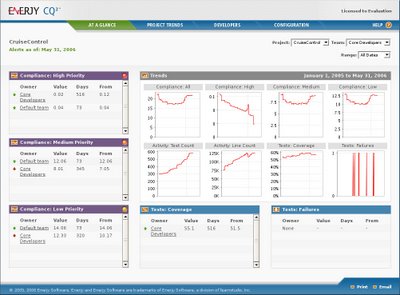 In this week's edition of InfoWorld, I review Enerjy CQ2. This is a development dashboard that integrates with existing SCM and defect tracking tools to quantify the status of a project and the productivity of developers and developer teams. I give the product a big thumbs-up, especially for Java projects, where it adds a powerful defect checker.

Unfortunately, the online version of the review does not include a screenshot, which is fairly important for seeing what the product is like. So, here is the starting page, from which you can drill down into CQ2's other dashboard windows. As you can see, it's a clean, uncluttered interface.

More on Writing Your Own Language

Martin Fowler has a great series of articles on writing your own language. The advice is primarily oriented towards little languages--or what are now called domain-specific languages (DSLs). However, much of the information applies to more ambitious language projects as well.

Writing your own language -- How to choose a VM

Let's say you want to write your own language, possibly even your own domain-specific language (DSL) and you want to run it on a VM. Which VM do you target?

You might instinctively think of the JVM (especially because there are so many tools to help you target the JVM) or the .NET CLR. These choices have the benefits of being highly optimized platforms on which numerous, substantial libraries already run. However in many cases, they will not be the best choice. For several reasons: they're big and difficult for users who are not technical to install (and you can't bundle them with your app); they can't be embedded into other applications; they might not support features you need.

There are many interesting alternatives that are small, reasonably fast, and have active communities supporting them.

There are, of course, the Perl and Python VMs. As you'll quickly see upon careful examination, however, both of those VMs are intimately tied to the languages they run. (No suprise there.) In addition, neither VM was really designed for targeting by other apps, so info on developing languages for them is not widely/conveniently available.

Other VMs do provide extensive support for new language developers, because they know this is the only way for them to build community. Here are three among the many you could choose from:

Lua, which consistently is the fastest performing VM outside of the JVM. It's also small, open source, widely used, and easy to embed. It's also very well documented and supported by an active community.

Pawn, designed primarily for embedding. Its own default language is a lot like C.

These VMs are all open source. Other VM candidates are listed here, although this list is far from complete.

Most of these VMs encourage your compiler to output not bytecodes but source code using their native language. In most cases, this is the right approach because 1) the VMs can optimize your code better than you can write in their bytecode format, and 2) it saves you a whole lot of aggravation by not having to learn the bytecode and the minutia of VM internals. (Some knowldege of VM interals will, of course, be necessary.)

That being said, you do you decide which VM fits your needs best? Some principal considerations include (more in the link below):

Once you have found a virtual machine that suits your needs, you have only to check out the community behind it, to make sure you're not nearly or completely on your own.

Note: Lambda the Ultimate is a terrific site for aficionados of programming language development. Here is a link to a post on this topic that might shed further light. If this area interest you, definitely tag/bookmark the Lambda site.

Final note: JetBrains, the makers of the popular IntelliJ IDE, have a mechanism that can be modified to provide an IDE extension for your language.

Edsger Dijkstra promulgated these rules in the context of scientific research, but I think they work well for selection of programming projects or, really, most intellectual endeavors that might break new ground.

The Three Golden Rules for Successful Scientific Research.
This note is devoted to three rules, the following of which is necessary if you want to be successful in scientific research. (If you manage to follow them, they will prove close to sufficient, but that is another story.) They are recorded for the benefit of those who would like to be successful in their scientific research, but fail to be so because, being unaware of these rules, they violate them. In order to avoid any misunderstanding I would like to stress, right in its first paragraph, that this note is purely pragmatic: no moral judgments are implied, and it is completely up to you to decide whether you wish to regard trying to be successful in scientific research as a noble goal in life or not. I even leave you the option of not making that decision at all.

The first rule is an "internal" one: it has nothing to do with your relation with others, it concerns you yourself in isolation. It is as follows:

"Raise your quality standards as high as you can live with, avoid wasting your time on routine problems, and always try to work as closely as possible at the boundary of your abilities. Do this, because it is the only way of discovering how that boundary should be moved forward."

This rule tells us that the obviously possible should be shunned as well as the obviously impossible: the first would not be instructive, the second would be hopeless, and both in their own way are barren.

The second rule is an "external" one: it deals with the relation between "the scientific world" and "the real world". It is as follows:

"We all like our work to be socially relevant and scientifically sound. If we can find a topic satisfying both desires, we are lucky; if the two targets are in conflict with each other, let the requirement of scientific soundness prevail."

The reason for this rule is obvious. If you do a piece of "perfect" work in which no one is interested, no harm is done, on the contrary: at least something "perfect"—be it irrelevant—has been added to our culture. If, however, you offer a shaky, would-be solution to an urgent problem, you do indeed harm to the world which, in view of the urgency of the problem, will only be too willing to apply your ineffective remedy. It is no wonder that charlatanry always flourishes in connection with incurable diseases. (Our second rule is traditionally violated by social sciences to such an extent that one can now question if they deserve the name "sciences" at all.)

The third rule is on the scale "internal/external" somewhere in between: it deals with the relation between you and your scientific colleagues. it is as follows:

"Never tackle a problem of which you can be pretty sure that (now or in the near future) it will be tackled by others who are, in relation to that problem, at least as competent and well-equipped as you."

Again the reason is obvious. If others will come up with as good a solution as you could obtain, the world doesn't loose a thing if you leave the problem alone. A corollary of the third rule is that one should never compete with one's colleagues. If you are pretty sure that in a certain area you will do a better job than anyone else, please do it in complete devotion, but when in doubt, abstain. The third rule ensures that your contributions --if any!-- will be unique.

I have checked the Three Golden Rules with a number of my colleagues from very different parts of the world, living and working under very different circumstances. They all agreed. And were not shocked either. The rules may strike you as a bit cruel... If so, they should, for the sooner you have discovered that the scientific world is not a soft place but--like most other worlds, for that matter--a fairly ruthless one, the better. My blessings are with you.

10 People Who Don't Matter in Tech

Interesting choices (Linus Torvalds, Jonathan Schwartz, Steve Ballmer--wow) made by Business 2.0. After reading their reasons, I can't say I disagree entirely with their selections. link