The Most Important Book of The Year 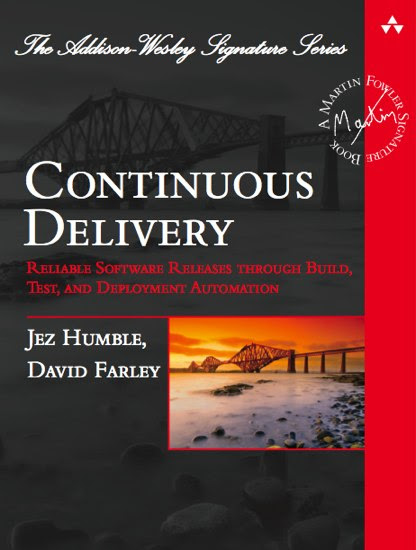 I have reviewed many books on this website and I have gone through numerous others as part of my work on the Jolt Awards, but it’s been a very long time since I’ve read a book as useful and likely game-changing as Continuous Delivery.

The basic premise of the book is that we need to move past continuous integration into a fuller cycle of activities that go beyond build and test. Specifically, this new orientation calls for building and testing on all platforms, creating and deploying the final deliverables for all platforms—with every check-in. The benefit of this approach is that the development organization at any given moment always has: 1) immediate feedback on deployment issues, 2) a deployable binary; 3) a completely automated process to build, test, and deploy on all platforms.

This simple concept—a kind of continuous integration on mega steroids—has profound repercussions, all of which make your process better. The first and most important is that you have to automate everything downstream from the coding. And the authors mean everything. The most common point where people hem and haw about automation is deployment. But Humble and Farley make it clear you have to “bring that pain forward,” and fix the process so it can be automated. (If you don’t have any idea how you might refine and automate deployment, think virtualization. Can you emulate your current systems on virtual machines and then progressively simplify deployment of the software to the point of automation? Good, you’re on your way.)

But the mechanics of deployment may be the least of your challenges (And here, the book’s name could be viewed as misleading: Deployment is only one aspect it covers.) You also have to build, run, and test the software on every platform you ship on. You’re not reasonably going to be able to do that if you have to change configurations and manually reset values for different platforms. The authors guide you to finding the one path that gets you across the river Jordan without spending 40 years in the desert of bit twiddling. The key is to use a single codebase and move the platform dependent stuff into configuration files. This is non-trivial, but the authors offer plenty of good advice.

Testing is another topic Humble and Farley explore in great depth. Testing in the context of continuous delivery is not just running unit tests and a regression suite. No , this is running all tests—unit, integration, UAT, and so on. How to automate them effectively occupies probably the largest chunk of the book. Even if you don’t accept the continuous delivery concept, this section is worth the price of admission. It’s mind-expanding, in ways that the hundreds of articles we’ve all read about agile testing on Digg and Reddit never touch on. You see very quickly how much more automation you could do and how to get from your miserable semi-manual existence to the smooth flow of full and continuous automation.

What impresses about the book is how the authors consistently work through hard problems. They are not daunted by them and there is no attempt to pas over them with hand waving. Hard things are examined in detail with a perspective that derives from the authors’ own extensive experience.

I have literally never read a better book on process. I believe that going forward, this book will redefine agile process and CI; and it will have as much influence as--I have to go back to 1999, here--Fowler’s book on Refactoring did on code.

I use a variety of PDF tools in my editorial work. I frequently create, mark up, manipulate, and combine PDFs. In addition, I contribute to the open source Platpus typesetting project, whose major output format is PDFs. And the PDF plugin is my specific bailiwick. So, over the years, I've come to know a thing or two about PDFs, as well as the limitations of PDF tools.

The standard for PDF tools has been Adobe's Acrobat suite. But this suite is expensive, somewhat quirky, and at times works poorly with other tools. Acrobat plugins to Microsoft Office and Internet Explorer are especially unreliable, and they frequently make their host programs behave erratically. I always uninstall them.

This means I need to use other options to convert Word documents to PDF. There are several common solutions out there, none but one of them is completely satisfactory. For example, the Microsoft Office PDF plugin does not embed all fonts, nor does it give you the option to do so. It does not embed the Base14 fonts.

This is a design error (that is common). Here is its history. For many years, Adobe guaranteed that Adobe Acrobat Reader would provide 14 fonts (the so-called Base14 fonts) in all implementations. These fonts were Times Roman, Courier, and Helvetica typefaces (each in regular, bold, italic, and bold italic—so 12 fonts) plus a Symbol and a Dingbat font. The rule was you did not need to embed these fonts in PDF documents, because Acrobat Reader would supply them. This scheme never worked very well. Its first limitation was that not all Times Roman fonts looked the same, so the same document could look strikingly different on two different computers. A few years ago, Adobe quietly discontinued supporting Base14 fonts in Acrobat Reader. The result is that if you're creating a PDF for distribution, you must embed all fonts, even the old Base14 fonts, if you want it to maintain your original format and layout.

The Microsoft Office plugin does not have this option, so as a result PDFs you generate with it are not guaranteed to look correct on other systems. And, in fact, they frequently do not.

The PDF generator that come with Adobe Acrobat (not the Reader, but the paid tools) works better. It does offer an option to embed all fonts. However, in Word documents with many links, it fails to identify all links. And so rather than be clickable, the links show up as pure text.

To remedy this, I tested various Word-to-PDF tools and found none that consistently met all requirements until I ran into Bluebeam PDF Revu, a tool I had not previously heard of.

The first thing I noticed was that Bluebeam's plugins were stable and they worked correctly. The second thing I discovered was that Revu found all links in documents and by default, it embedded all fonts. So far, so good. The attention to small details in its PDFs are part of Bluebeam's DNA—it was designed as a tool for CAD users, so correctly rendering every detail of a document is a specialty.

Like the Adobe Acrobat toolbox, Revu provides editing capabilities, with better text mark-up tools than Acrobat. It also enables you to construct your own menu of tools for faster access to frequently performed operations. Form handling, digital signatures, etc. work exactly as expected. Multi-document processing can also be automated with the product. Adobe Acrobat Pro—the comparable offering from Adobe—retails at $449 list, and $350 at Amazon

. The academic version of Acrobat can be found for the same price as the full Bluebeam Revu ($149) product. So, if you want the full range of options, better implemented than in Adobe's offering, and at a lower price, have a look at Bluebeam PDF Revu. (They offer a 30-day free trial.)

Keeping LOC and Tests in Balance

The proliferation of metrics in software development threatens to take important quantitative measures and bury them beneath an avalanche of noisy numbers. Consequently, it's important to look for certain ratios and trends among the numbers to inform you whether a project is healthy. One tell-tale relation links LOCs and number of tests. These two values should grow in direct proportion to each other.

The included diagram presents the ratio of these two values for Platypus, the OSS project I work on.

As you can see, except for a few dips here and there, these numbers have stayed in lock step for the last 18 months. And, as you might expect, code coverage from these tests has similarly remained in fairly narrow range--right around 60%.

The most typical violation of this ratio is, as you would guess, a jump in LOCs without a corresponding rise in tests. This is something managers should watch out for. With a good dashboard, they can tell early on when these trend lines diverge. This is frequently, but not always, always indicative of a problem. (For example, it could be that a lot of code without tests was imported to the project.) Whatever the cause is, managers need to find out and respond accordingly.

(For the record, the tests counted in this diagram include unit tests and functional tests.)